Alan Matthews explains why extending the Industrial Emissions Directive to the most polluting livestock farms is justified.   It will be extended to large dairy and cattle farms and more pig and poultry farms.  Ammonia and methane emissions have fallen by very little since 2005.  The livestock sector is responsible for the majority of them: http://capreform.eu/regulating-the-most-polluting-livestock-farms-is-justified/

The proposal has attracted strong opposition in the European Parliament.

Alan Matthews looks at the evidence on the changing structure of EU agriculture.  Although the number of farms has declined, the area farmed remains broadly stable: http://capreform.eu/tracking-structural-change-in-eu-agriculture/

The EU is considering delaying plans to halve the use of pesticides over fears that the move could cut production and raise food prices at a time when they are under pressure from the conflict in Ukraine.

The Sustainable Use of Pesticides regulation intends to halve chemicals use by 2030.  This was always an ambitious project, given the lack of progress in getting biological alternatives developed, registered and on the market - and training farmers in their use.

EU farm lobby Copa-Cogeca is pushing for a range of green initiatives to be delayed or abandoned.

The current Czech presidency does not expect to find a compromise by the end of the year and there is some unease in the European Parliament about the proposal.

Email ThisBlogThis!Share to TwitterShare to FacebookShare to Pinterest
Labels: pesticides

UK growers are scaling back production in greenhouses as energy costs increase, a pattern that is replicated across Europe.  Crops that require intensive heating in colder climates such as tomatoes, cucumbers and lettuce are the most directly affected.

However, the energy crisis is impacting the EU food supply chain more directly.  Bakers, dairy farmers and other producers, including growers of sugar beet and olives are struggling to pay bills.  The price of inputs such as fertiliser and animal feed has shot up, alongside rising refrigeration and transport costs.

The UK's support plan for small businesses lasts just six months and so far lacks detail.     It is claimed that 75 to 80 per cent of UK salad growers will not plant next year.

In the Netherlands, which accounts for a quarter of world tomato exports, many glasshouses are going dark.  The largest tomato supplier in Sweden and Denmark is also switching off this winter.  Growers in Spain and Morocco may not be able to fill the gap.

In Italy, where growers are already struggling with a drought, it is estimated that a third of farmers are operating at a loss.  Monthly energy bills have typically tripled and fertiliser costs are up fourfold.  Many farmers on fixed contracts are choosing to sell the energy on.

Farmers may increase output of less energy intensive crops such as peppers.

My new book on agricultural and food policy is now out. 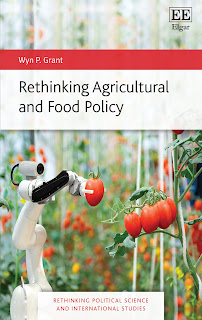 This book takes stock of the urgent challenges facing food chains globally and provides a critical evaluation of radical new thinking and perspectives on agricultural and food policy. Wyn Grant investigates the principal drivers of change in food and agriculture, including globalization, climate change, the structure of the industry, changing patterns of consumer demand and new technologies.Rethinking Agricultural and Food Policy provides a comprehensive account of the contemporary challenges impacting the food chain. Chapters explore the various barriers towards positive progress, exposing the deficiency of institutional architecture at a domestic and international level and examining how attempts to reform and revitalize it encounter inertia, embedded production structures, defenders of the status quo and vested interests. Proposing that a holistic, interdisciplinary approach is essential in making progress towards revitalizing policy and encouraging innovation in international governance, Wyn Grant calls for a new agenda to deliver real and necessary change and offer hope for the planet and its people.Using critical insights from natural and social science to uphold its calls for a holistic, integrated approach to agricultural and food policy, this timely book will be an essential read for policy makers, as well as students taking undergraduate or postgraduate courses in agriculture, food and the environment.

Farm to Fork strategy under threat

The EU's commitment to tackle climate change in the food chain has arguably never been as strong as it should been, in part because of pressure from the agri-food industries, but the Farm to Fork strategy at least outlined a way forward and set some targets.   Now it is under jeopardy as climate change is once again relegated in importance as food security comes to the fore given the historic role of Ukraine as a European 'bread basket'.

Farm to Fork targets included cutting fertiliser use by a fifth (it may reduce anyway because of soaring prices), halving the use of antibiotics and increasing the amount of land farmed organically from 9 per cent to 23 per cent.   Pesticide use has already decreased with many substances banned.

French president Emmanuel Macron has said that the sustainable food strategy was 'based on a pre-Ukraine war world' and should be revised, claiming it would lead to a 13 per cent drop in food production: https://www.euractiv.com/section/agriculture-food/news/macron-wants-to-adapt-eu-farm-to-fork-to-the-post-ukraine-war-world/

He would, wouldn't he?  He is facing a presidential election in which he needs the votes of farmers, but Italy and Spain have raised similar concerns.

The farm lobby in the form of Copa/Cogeca have seized the window of political opportunity and called for increased fertiliser imports, pesticide use and cultivation of crops for animal feed.  They have also called for opt outs from ecological schemes and climate-linked animal welfare standards.

The Food Policy Coalition insists that the war in Ukraine is a reminder of how important it is to implement the Green Deal and the Farm to Fork and Biodiversity strategies: https://foodpolicycoalition.eu/wp-content/uploads/2022/03/Joint-open-letter-EU-food-supply-and-solidarity-response-to-the-war-in-Ukraine.-March-2022.pdf

Farm ministers were meeting in Brussels on Monday March 21st.

The green transition is certainly in danger and there is a risk of taking panic measures in current circumstances.   Measures to tackle climate change had their limits in the CAP anyway. Production and environmental protection need not be an 'either or' choice.

Risks to the sustainability agenda

It could be 'back to the future' as farm organisations use the war in Ukraine to bang the food security drum.  There are, of course, real issues here, given the importance of Russia and Ukraine in wheat production, but there is a risk of reverting to old fashioned blunt instrument subsidies and downgrading the sustainability agenda.

In particular one could create a false dichotomy between food security and sustainability: https://www.foodnavigator.com/Article/2022/03/07/Ukraine-war-detonates-EU-food-security-debate-but-will-sustainability-be-collateral-damage#

I will write more about this issue in the coming days.