A fascinating study explores the association between farmers' attributes and profitability.

PhD candidate Niall O'Leary at the University of Reading has found that a large proportion of the variation in farm profitability can be predicted by the attributes of a farm's manager. Two studies of dairy farmers in Great Britain were carried out and almost 40% of the variation in farm profitability could be explained by five variables in one study and by three variables in the other.

The major predictors of farm profitability identified fall under the following five categories.

The effect of Detail Conscious is significant with 24% of variation in profitability covarying with it. A high scorer 'focuses on detail, likes being methodical, organised and systematic'. A low scorer is 'unlikely to become preoccupied with detail, less organised and systematic, dislikes tasks involving detail'. A one point difference in Detail Conscious on the 1 - 10 scale is associated with 1p per litre or £72 per cow greater profit per year.

Leadership is described as 'Inspiring and guiding individuals and group. Leading by example and arousing enthusiasm for a shared vision.'Relaxed is negatively associated with profitability. A high scorer on the Relaxed measures 'finds it easy to relax, rarely feels tense, generally calm and untroubled' and a low scorer 'tends to feel tense, finds it difficult to relax, can find it hard to unwind after work'.

The need for resilience 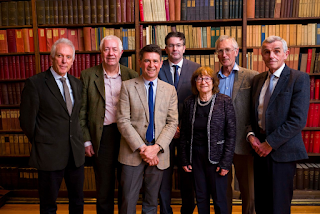 Participants in the panel on Brexit and agriculture

The Agricultural Economics Society conference in Dublin in the earlier part of this week attracted a number of interesting presentations and a speech by EU agriculture commissioner Phil Hogan.

One point that he made was that any free trade agreement with the UK would have to cover food standards, food quality, food safety, animal welfare and environmental issue. The aquis wold have to be imported into a FTA. The UK could not be used as a backdoor mechanism for inferior goods.

One theme that emerged from the conference was the need for farmers to show 'resilience' in the face of changing conditions and uncertain circumstances. However, that may not be a quality they all have.

One poster presentation by Niall O'Leary investigated the personality traits of farmers. It showed that 'independence' was the most common trait, in the sense of 'I'll do it my way.'

Agricultural economist Alan Swinbank said that high tariffs were a relic of a 1980s CAP when there was a fear that imports would undermine the intervention price. If one lowered tariffs to ten per cent that would still give more protection than enjoyed by other sectors.

There was considerable discussion of ecosystem services, although I was still left uncertain about how this concept could be operationalised. In policy terms it was seen as a means of challenging the 'agriculture first' element in policy. The objective would be to promote the total social value of rural land resources.

It was uncertain whether we had identified all ecosystem services. How could a balance be achieved between marketed and non-marketed services? There was the question of trade offs between different ecosystem services. Local environmental governance organisations (LEGOs) could be a mechanism for coordination at a local level.

How will Brexit affect British farming?

Share Radio talks to myself and NFU Vice-President Guy Smith: Brexit and farming

Email ThisBlogThis!Share to TwitterShare to FacebookShare to Pinterest
Labels: Brexit

From crop protection to crop health

As a member of the Farmer-Scientist Network at the Yorkshire Agricultural Society, I was involved in getting this project off the ground which is using field trials to see if we can make more use of biologicals in plant protection. View the introductory video here: From crop protection to crop health

Roma Gwynn and other experts look at the future for pesticide regulations here: Horticulture Week

The benefits of stability 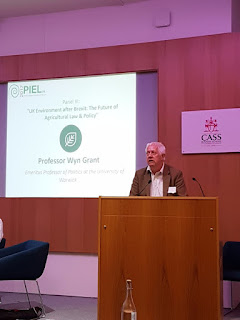 The round of talks on Brexit and agriculture, at which one often meets the usual suspects, continues. Next stop Dublin, yesterday it was the Public Interest and Environmental Law (PIEL) conference at Cass Business School, ably organised by students.

My central focus was on the need for well-designed policy instruments in a domestic agricultural policy that would meet their objectives without imposing undue transaction costs.

Our chairman from the RSPB made an interesting observation. He said that the CAP was slow to reform, but the other side of the coin was that it offered stability through the legislative framework. Moreover, it offered a multi-year budget but in future we would be facing an annual budget with competing demands on resources.

Incidentally, I never knew that red diesel was used at Heathrow and for the refrigeration compartments of food lorries.