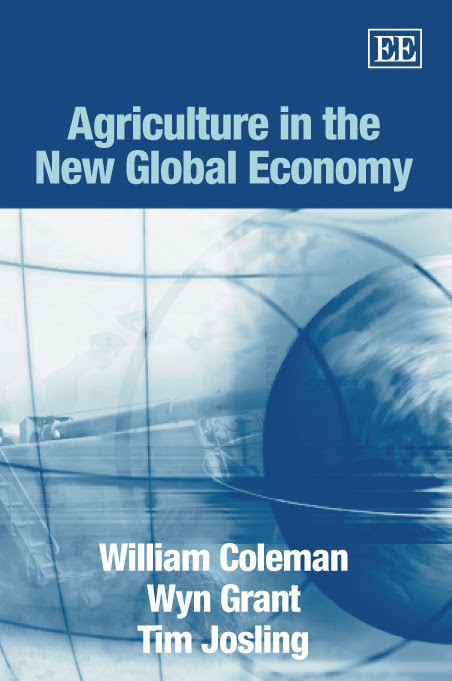 Our new book deals with many of the issues dealt with on this page. For further information and a 10% discount on orders go to Edward Elgar
Posted by Wyn Grant at 1:28 AM 6 comments:

George W. Bush's nominee for agriculture secretary, Governor Mike Johanns of Nebraska, is a man who liks his pork. Outgoing ag secretary Anne Veneman was unenthusiastic about the 2002 farm bill that gave generous subsidy increases to US farmers. Mr Johanns was a strong advocate for the legislation, leading the issue for the Western Governors' Association during the debate over the legislation. President Bush praised the bill when announcing the nomunation, which led to a 27 per cent increase in farm subsidies last year to over $16bn, as 'critical to the success of our farmers.'

The stance of Governor Johanns is not surprising when one considers that Nebraska, which is the fourth largest agriculture exporting group, was also the fourth most heavily subsidised farm state between 1995 and 2003. According to the Environmental Working Group, the state's farmers (particularly corn, soyabean and wheat growers) received more than $7.5bn in subsidies between 1995 and 2003.

Mr Johanns' appointment received warm support from farm lobbies. Keith Berry, the president of the National Pork Producers' Council, called him a 'top-notch agricultural leader' and praised his involvement in international trade issues.
Posted by Wyn Grant at 1:48 AM No comments:

As the controversy over future Turkish membership of the EU grows, it is becoming increasingly evident that the burden that would be placed on the CAP would be considerable. German Christian Democrats and leading politicians in France are advocating a 'privileged partnership' for Turkey as an alternative to full membership.

The Commission has estimated the CAP cost of Turkish membership in 2025 (at 2004 prices) at €11.3bn. A new study by the University of Wageningen, which admittedly makes an unrealistic assumption about membership being possible by 2015, gives a much smaller figure of an extra €5bn on the annual bill for agricultural and rural support. Indeed, the study also makes a number of other assumptions that may not be fulfilled such as reform of the sugar regime, abolition of export subsidies and a 20% appreciation in the Turkish lira. However, the study also argues that Turkish membership would lock the EU into a long-term commitment to continue transferring resources to an underdeveloped agricultural sector.

The report predicts that massive pre-existing problems of poverty and unemployment in rural areas would be made much worse in the short term by the shock of competition with farmers in the rest of the EU. Turkey is seen as being in no position to implement the complex regulatory structure of the CAP. This is not just a problem of a lack of trained staff, but the dual nature of the Turkish economy in which much work is casual and not officially declared. Moreover, diseases endemic to the country would delay the integration of the country into the single market for animal products for many years. Food hygiene standards are also poor.

The issue of further enlargement is becoming an increasingly fraught one for the EU. Ukranian overtures have received short shrift because of geopolitical considerations. But exactly where does Europe stop? New member states may be unwilling to slam down the shutters. However, this page has serious concerns about the admission of Bulgaria and Romania, both in terms of the financial implications and administrative systems in those countries. Yet delaying their admission would be a big blow to their efforts to reinvigorate their economies. There are no easy answers, but further enlargements are going to increase the pressures on the CAP.

Although they are to receive full rather than phased in payments under the Commission's proposals to deal with the unreformed sugar regime, a number of new member states have been lining up to try and dilute the reform, perhaps giving a hint of the way in which EU agricultural politics is moving.

Hungary, Latvia, Lithuania and Slovenia have signed up to a letter sent to Commissioner Boel arguing that production must be kept intact across the whole EU. Finland, Greece, Ireland, Italy and Portugal are also signatories to a letter which effectively calls for a policy that would freeze the existing distribution of sugar production. However, the Czech Republic, Poland and Slovakia are also said to be sympathetic to this 'conservative' or effectively anti-reform position.

Ranged against them is a smaller group of reform states: the usual suspects (Denmark, Sweden and the UK) plus one new member state (Malta). The UK's stance is in spite of the fact that research suggests that a 25% cut in the UK's production quota could lead to a 54% fall in the area under sugar beet. Germany and the Netherlands have some sympathy with this position.

Finland could be bought off by special measures for its Less Favoured Areas. France has advocated a more geneous restructuring fund. This could be a way forward, as it would allow restructing to proceed, but with more generous side payments to those who lose out.

Commissioner Fischer Boel has warned that it is unrealistic to expect sugar production to continue in all member states. Meanwhile, the Commission's proposals are under fire on from Oxfam.

Proposals not so sweet for Global South

Oxfam argues that prices should be kept high for a time to permit restructuring in poorer countries such as Mozambique and Zambia to allow them to compete on the world market. Such countries suffer from dilapidated transport systems and other infrastructure problems. Quite how long it would take to rectify these problems is unclear, but Oxfam recommends shallower price cuts over a long period.

This proposal has drawn the fire of the European chocolate, biscuit and confectionery industry (CAOBISCO) who effectively argue that Oxfam want to have their cake and eat it. They argue that the Oxfam proposals would artificially stimulate investments directed at an already oversupplied European market.

Support for cutting beet production in Europe comes from the Worldwide Fund for Nature who argue that it may be responsible for more loss of biodiversity than any other crop. They argue that it leads to loss of natural habitats, intensive use of water, heavy use of agro-chemicals and discharge and run-off of polluted effluent.
Posted by Wyn Grant at 9:47 AM No comments: