It looks like a no brainer, but is it?

The latest phase in the debate about the future of agricultural policy in England is the call for a diversion of subsidies from large estates to smaller firms. It is easy to make both an intellectual and a populist case, but one also needs to consider countervailing arguments.

The Campaign to Protect Rural England (CPRE) argues that it is wrong to pay people more subsidy simply because they own more land: CPRE report It proposes that all farmers should receive a higher amount per hectare for the first 50 hectares they own but payments should reduce for the next 100 hectares and then continue to taper.

The countryside is, of course, more than an aesthetic asset to be enjoyed by urban populations, it is also a means of food production, although that food production needs to take into account environmental impacts. Particularly valued areas of countryside are designated as national parks, although even here farming contributes to their appearance.

The CPRE says that it is not engaging in 'big farm bashing', but size of farm is not necessarily related to how well farming is undertaken, although there is some evidence that larger farms tend to have higher animal welfare standards. Big estates can be well integrated into their local communities, not least as a significant source of employment.

Some of the payouts to big farms can be substantial, Last year, Farmcare Trading, the former Co-op farms bought by Wellcome Trust in 2014, received £1.7m. Beeswax Farming, owned by Sir James Dyson of bagless vacuum cleaner fame, received £1.4m. Blankney Estates in Lincolnshire got £1.1m. Lilburn Estates in Northumberland, owned by Duncan Davidson, founder of the house builder Persimmon, received £915,000. The Elveden Farms in Suffolk, owned the Earl of Iveagh and the Guinness family, received £915,000.

A recent report from Exeter University, commissioned by the Prince's Countryside Trust, argues that small family farms employ more people per acre (i.e., are less capital intensive), help sustain rural services and provide a wider variety of locally produced food. The number of such farms has fallen from 84,000 in 2000 to fewer than 67,000 in 2013.

What does one consider is how far competitiveness objectives should form part of any future policy. Large farms in countries such as France and Germany will continue to receive CAP subsidies, leaving English farms at a competitive disadvantage. The result could be more food requirements being met by imports and hence a decline in domestic food security.

What is clear is that the present level of subsidy to larger farms will not be affordable. However, a debate is needed about the priority given to different policy objectives, something that never really occurred with the CAP.

Farm subsidies to run until 2020

Philip Hammond as Chancellor has undertaken to maintain current farm subsidies until 2020 when the current EU multi-year programme ends. According to some reports, that may not be that long after Brexit takes place.

Not only does enable farmers to make business plans for the next four years, it allows full time for a debate about the future support regime for farming.

When Brexit does take place it will be necessary to fix farm subsidies with a sterling value.

There is still some uncertainty about exactly what is on offer. Chief secretary to the Treasury David Gaulke has stated that 'the agricultural sector will receive the same level of funding it would have received under Pillar 1 of CAP until the Multiannual Financial Framework in 2020.' Will this be inflation adjusted? Inflation looks likely to rise to a higher level over the next year or two.

Farm business consultants Andersons have pointed out that the final year of the MFF actually pays the 2019 Basic Payment. It is thus possible that the guarantee lasts only until 2019.

It is clear that agri-environmental agreements already under way will be honoured, but there are questions over Countryside Stewardship agreements due to start this autumn. Applications to other rural development projects, including Leader projects that help rural businesses to grow, are guaranteed only if they are agreed before this year's Autumn Statement.

The Government statement says, 'The Chief Secretary to the Treasury, David Gauke, has also written to each devolved administration to confirm the same level of assurances offered to UK government departments in relation to programmes they administer but for which they are expected to rely on EU funding. The Treasury will work closely with the devolved administrations on subsequent funding arrangements to allow them to prioritise projects within their devolved responsibilities.'

This was well received in Northern Ireland where it was seen as removing uncertainty, but declared to be not good enough by the Scottish Government finance minister.

Britain's largest membership organisation, the National Trust, has demanded a complete reform of farm subsidies after Brexit. The idea is that the basic payment would be scrapped and farmers would just be paid for ecosystem services or public goods: Reform call

I heard Dame Helen Ghosh, the director of the National Trust and one time permanent secretary at Defra, interviewed on Radio 5 this morning and she did say that subsidies would have to be phased out over a five or six year period. I would favour seven years and the use of a bond scheme I outlined in an earlier post.

She argued that farmers deserved a better return from the market. No doubt they do, but would the market respond, given retailer power and the limitations of the supermarket ombudsman? Governments in practice welcome oligopolistic price competition between retailers because it holds down food prices for families who are already struggling with tight budgets.

Her views are certainly not without merit and will receive wide support from those who want to see an agricultural policy that places greater emphasis on sustainability. Farmers who voted for Brexit may now start to realise what they have unleashed.

The NFU has responded saying that farmers take their role as custodians of the countryside seriously, but we need to recognise how vital food production is: NFU response

Brexit and agriculture - what now?

My latest reflections for the Landbridge blog: Brexit and agriculture

How universities link with agriculture

One of the components of a post-Brexit agriculture policy needs to be greater 'near farm' applied research that can be delivered to farmers. We are working on that in the Farmer-Scientist Network of the Yorkshire Agricultural Society. Learn more about its work here: Farmer Scientist Network

This blog post takes a look at how many universities have farms: Farming boffins

Unfortunately, our own Warwick Crop Centre (the former Warwick HRI) does not get a mention: Crop Centre

How coupled payments make a difference

The last CAP reform allowed the devolved administrations to make 'coupled' payments in addition to the basic payment for particular schemes. A case in point is the Scottish Upland Sheep Support Scheme where payments to farmers have just started. It was originally envisaged that they would receive €100 per hog ewe, but demand for the scheme has reduced the payment to €78.12, still a significant amount, particularly given the falling value of the pound. 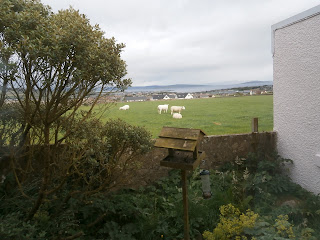 I have just returned from a visit to Orkney which is traditionally a beef area, although there are dairy herds which, among other things, supply the Orkney cheddar cheese factory which is a protected 'geographical indication'. I was surprised by the growth in sheep numbers, but the coupled payment could help to explain it.

The scheme is devised for rough grazing areas and is intended to protect the social and environmental benefits that sheep bring to those areas. There is also a Scottish Suckler Beef Support Scheme. Beef accounts for 22 per cent of Scottish agricultural output over the last ten years.

The farming community in Orkney seems to be in good heart, with their own specialist and informative magazine, The Orkney Farmer. 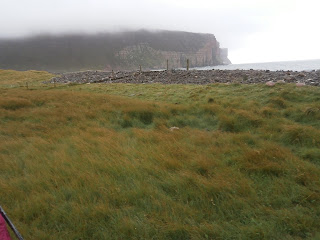 Some land in Orkney, notably on the island of Hoy, is not even suitable for rough grazing.