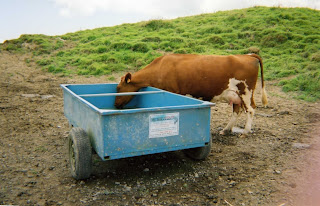 The satisfied look of this cow in the Azores is no great surprise as it receives one of the biggest cattle subsidies in the EU, although still not enough for Portugal who voted against the last CAP reform on the issue of the fate of dairy cows in the Atlantic islands.

After 39 years of a butter mountain under the CAP, it has finally melted away. When the Soviet Union still existed, stocks of 'ageing' butter used to be sold off to its consumers who were glad to get any butter at all.

The last remaining stocks (in the Czech Republic, Finland and Spain) have been sold off. High market prices have led the Commission to close intervention in Spain, so it only remains open in Portugal.

Stocks reached a peak in 1986 when stocks totalled no less than 1.283 million tonnes, but the imposition of milk quotas helped to curb the build up. The other form of intervention buying in the dairy market, that of skimmed milk powder, ended in 2006.

Dairy intervention arrangements could be abolished as part of the forthcoming Health Check review. Dairy farmers still receive support, however, even though they might like to pretend otherwise. The virtual cow that was launched at the end of the 1990s never made its way into legislation, but dairy farmers receive their payments in another form.

Oxfam has estimated that a dairy cow in the EU can receive a subsidy of as much as $2 a day. Even if this figure is exaggerated, it is more than many people live on in least developed countries.
Posted by Wyn Grant at 11:49 PM 2 comments:

Norfolk farmer David Richardson writes a weekly column in Farmers Weekly. The magazine has recently undergone a revamp under a woman editor, but David Richardson's column has survived, no doubt because he is seen as an articulate spokesperson for the 'big' farmer.

I met David Richardson once and he is undoubtedly a pleasant and sincere guy who defends his corner as best he can. But it's a pretty unreconstructed corner. Any argument will do to defend protection and subsidies for British farmers. Food security has always been a favourite theme of his in recent years. Defra is, of course, either hostile or ignorant to farmers, unlike good old MAFF. Anyone who fails to buy British food (unless it is a tropical crop) is close to being a traitor, while Global South farmers shouldn't be allowed to export to Britain because their animal welfare standards don't match those in one of the richest countries in the world.

In one of his most recent columns, Richardson claims 'subsidies - particularly the SFP element- are going to be phased out over the next few years.' I've heard a distinguished official at a farming organisation taking a similar line. And I've even heard a similar line taken by experienced BBC journalists who should know better.

Now it's more than likely that the 'financial discipline' will reduce SFP between now and 2013 because of the accession of Bulgaria and Romania but only by probably about seven per cent. Given that Mr Richardson, by his own admission, derives some twenty per cent of his farm income from SFP (and more from other payments), he should still be safe for nineteen per cent.

It's likely that SFP will be reduced further after 2013 but it is unlikely to disappear altogether.

So why are the likes of Mr Richardson making such claims which are remnsicent of the famous line favoured by one character in the old British sitcom Dad's Army, 'we're all doomed'? I would suggest because if such claims are made long enough and loud enough, the public will believe that subsidies are not being paid any more.

It has been claimed that the public is becoming more sympathetic to 'supporting' British farmers, although why a commercial activity should need supporting (other than for the public goods it provides) is not clear. But a mixture of ignorance (about the true cost), sentiment (about the countryside) and nationalism (about food security) can provide a heady mix in support of the status quo.
Posted by Wyn Grant at 12:25 PM No comments:

Seeing through the Commission's proposal for reform of the fruit and vegetable regime could bring health benefits. With the exception of Greece and Italy no EU member state is currently meeting the World Health Organisation's recommended consumption rate of 400kg per day per capita. From the viewpoint of Commission officials, getting consumption up to the WHO minimum level would also provide a commercial answer to the sector's marketing problems.

Fruit and vegetable markets are very susceptible to short-term supply and demand crises. These result from both the perishable nature of the product and the susceptibility of both production and consumption to weather conditions. It is hard to underestimate how weather sensitive demand for these product is.

The Commission favours 'Producer Organisations' operating their own 'crisis management' schemes. This is a rather old style 'corporatist' solution which is handicapped by the fact that such organisations do not exist in all member states. In the Netherlands with its extensive glasshouse production sector, 79 per cent of growers are in such organisations. Membership in some accession states is particularly low: 1 per cent in Poland, 3 per cent in Cyprus and 4 per cent in Hungary.

However, some member states have still been upset by the Commission's far from radical proposals. They are particularly opposed to the idea that 20 per cent of an organisation's budget should go on environmental measures and that no more than 30 per cent should be spent on crisis management.

The UK uses a retailer led system of category management with a limited number of suppliers to each retailer, although a supplier may organise several growers. I am currently engaged in two research projects related to the horticulture sector and it has to be admitted that this system does produce greater concentration of ownership and production with retailers able to delist suppliers with little warning. However, the solution to those problems might lie in a more robust application of competition policy, something to be discussed in a future post on the dairy sector.
Posted by Wyn Grant at 4:53 AM No comments:

It sounds like a Maoist slogan, but farm commissioner Mariann Fische Boel set out a 'one vision, two steps' plan for the reform of the CAP at the recent Agra Europe conference in London. As she has made clear before, the forthcoming Health Check which will address the period up until 2013 is seen largely as a tidying up exercise rather than an opportunity for further fundamental reform. The Commission is currenly preparing a Green Paper on the Health Check but this is not expected to be ready until after the summer.

However, a substantial shift in the structure of EU financing for agriculture and the rural economy remains a distinct possibility for the period after 2013. In the meantime, Single Farm Payment payments could be cut by 7 per cent a year by 2013 under the Financial Discipline Mechanism. This would result from the continuing phasing in of direct aids to accession states, aggravated by the addition of Bulgaria and Romania which took the SPS payment budget beyond the Pillar 1 budget ceiling. However, Fischer Boel confirmed that the SPS 'will be with us for a long time to come.'

The Danish farm supremo had little time for the two main drivers of CAP reform. She said that 'Thinking about policy must drive the European budget. If we put things the other way round ... we won't have a CAP that can meet the very real challenges of the futuree.' She also declared that she would not allow the Doha Round of international trade talks be 'the main driver of our domestic policy for farms and rural areas in the years ahead.'

In short, Fischer Boel wants to continue the reform process, but she wants to retain a CAP a long time into the future. And, of course, doing the first task makes it easier to achieve the second.
Posted by Wyn Grant at 3:05 AM No comments:

Having been told that 40 per cent of the overall EU budget is spent on agriculture, only 16 per cent thought this was too high and almost 6 in 10 thought that this share should stay the same or increase in coming years. But then presumably if one told some respondents that 40 per cent of the EU budget went on supporting small shopkeepers, one might get a similar pattern of answers.

Those questioned (41 per cent) thought that ensuring the health and safety of food products should be the main priority of the CAP and one might question how far that forms part of the policy.

In between public ignorance and concentrated interests seeking to defend the CAP, it's difficult to find a space in which reformists can insert themselves.
Posted by Wyn Grant at 11:30 AM 1 comment:

It's nice to have it confirmed

Maurice Faure is the last surviving signatory of the Treaty of Rome. So it's nice to have his confirmation that the Treaty, whose agricultural clauses have never been modernised, was a great deal for farmers.

Faure told the Financial Times, 'The Treaty of Rome was very favourable to farmers.' The new arrangements offering subsidies and markets for France's grain and sugar beet surpluses were 'a big concession by Germany.'
Posted by Wyn Grant at 12:49 AM No comments: