An interesting article in the Financial Times which looks at some short-run political maneouvring in France, reviews French proposals to tackle price volatilty and suggests that, as CAP money is transferred to new member states, the policy may become a drain on the French exchequer, possibly leading to a long-run shift in the French stance: France
Posted by Wyn Grant at 11:04 AM No comments:

Call for tax on livestock emissions

Methane is a particularly powerful greenhouse gas and recent research suggests that it may have 33 times the effect of carbon dioxide when its interaction with airborne particles is taken into account. It is also very persistent in the atmosphere.

Calls for a tax on livestock emissions have been discussed half seriously in the European Commission, but now it has been advocate by the United Nations: Flatulence

What is evident more generally is that agriculture and the food chain has to be fully incorporated in attempts to mitigate and adapt to climate change. However, the farm lobby has been a powerful opponent of the cap-and-trade bill in the US.
Posted by Wyn Grant at 1:02 AM No comments: 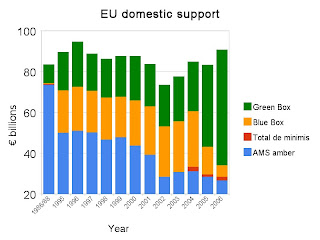 CAP subsidies as reported to the WTO reached a new high of over €90 billion for the decade in the 2006/7 marketing year, but conveniently most of them have been parked in the allegedly non trade distorting green box, something that has provoked disquiet in Geneva: Subsidies
Posted by Wyn Grant at 6:17 AM No comments:

The authoritative Agra Focus has given a positive report on how new commissioner Dacian Ciolos handled his confirmation hearings in front of the European Parliament, although they and others think that the process leaves a lot to be desired.

Given his background it was not surprising that he would handle technical matters competently, but apparently his political atennae were impressive. Let's hope this doesn't mean kowtowing to farm interests. The longest spontaneous applause he received from MEPs in the committee was for stating that he will defend the largest CAP budget possible. He has also received the dubious accolade of being embraced by the farm lobby COPA-COGECA which welcomes his intention to defend a 'robust CAP'.

He did make it clear that direct payments will have to be maintained to provide 'a minimum level of stability in farmers' incomes', but this was not a surprising stance. He cited food security as one reason, but one might question why farmers need financial stability when it is not available to other small businesses that face fluctuating levels of demand.

He did, however, rule out any return to old style policy instruments, making the sensible suggestion of a guarantee or insurance fund that could kick in should there be price volatility. He also wants to reduce the gap between the average payments per hectare in member states by moving away from payments on an historic basis as used in most 'old' member states.
Posted by Wyn Grant at 6:11 AM 1 comment:

Email ThisBlogThis!Share to TwitterShare to FacebookShare to Pinterest
Labels: Dacian Ciolos, future of the CAP

So, it's farewell then Mariann Fischer Boel

I think she's done a reasonably good job, not as good as Franz Fischler, but he was a hard act to follow and whoever came after him was going to have to consolidate and deal with the unfinished business. I am sure that sorting out the unreformed sugar sector required a lot of determination and energy and used up political capital.

The farm commissioner is constrained by the political forces surrounding her and you need to be both a strategist and a wily tactician to change anything. Franz Fischler was both and he also seized a window of opportunity which may not repeat itself now that food security has become a dominant discourse.
Posted by Wyn Grant at 12:48 AM No comments:

Landowners and conservationists have launched proposals for a more environmetally friendly CAP: CAP

When I attended a RASE lecture last year it was evident that there were some differences of emphasis between the approach of the Country Land and Business Association and the NFU. These have now become more marked to judge from the NFU's response which sees the CLA's approach as 'out dated' and 'naive': NFU
Posted by Wyn Grant at 8:38 AM No comments: