Brexit is going to occur, but we do not know what form it will take or when it will be completed. The chances of a very hard Brexit seem to be increasing which would not be good news for farming in particular and the economy more generally.

Last week I gave a presentation in the Entente Cordiale room at the Foreign and Commonwealth Office on options for a domestic agricultural policy after Brexit. Staff from a number of government departments were there including Brussels and UKRep Brussels. There were some very good questions, as one would expect.

I suggested that what we needed to learn from the CAP was the need to have a clear and hierarchically ordered set of objectives. We should avoid poorly designed and overly complex policy instruments that imposed high transaction costs on both government and farm businesses.

Policy should seek to support an economically, socially and environmentally sustainable agriculture:

What will go and what the emphasis will be

Area payments would disappear, except possibly in upland areas. There has been resentment at large sums paid to big scale farmers, often investors from outside the industry who may have tax planning motivations. However, it should be remembered that big farms are generally the most competitive, and they will be competing against, for example, North European grain farmers who will still be receiving EU subsidies.

The emphasis in the future will be on public goods, as is evident from remarks made by the Secretary of State (Michael Gove) at the Conservative Party conference and elsewhere. These would include the maintenance of valued landscapes and resilience in relation to climate change. There is a lot of interest in ecosystem services. Payment for them would mainly benefit upland farmers, but how does one price them?

Farming is on the verge of a digital technological revolution which is likely to be as important as earlier revolutions which saw the introduction of crop rotation and agronomy; mechanisation; and artificial fertilisers/agrochemicals. Data from near earth satellites has been used for some time, but drones offer more precise information to guide decisions in relation to crops. There will be an ability to monitor the condition of cattle ín the fields. Advances are being made in robotic ploughing, planting and cropping.

Accelerating this trend may be an area where the Treasury would be willing to provide some support. Knowledge transfer and training is key with an important role for the existing four Centres for Agricultural Innovation.

There might be a case for supporting investment in buildings and equipment, particularly for sectors that did not receive much CAP funding, e.g., pig farming. This could run up against the additionality problem of paying farmers to do things they would have done anyway, but it would be a mechanism for helping farms to remain internationally competitive.

I noted that migrant labour was one one of the biggest concerns raised with me by farmers as its availability was already declining. This was a particular issue for the horticulture and field vegetable sectors. However, dairying had become increasingly reliant on EU and Fillipino labour. In a time of full employment, recruitment from the local unemployed pool was not possible, even if it ever was. Further mechanisation was some way off. What was needed was a new version of the SAWS scheme, but the difficult political question would be which countries to include.

Elephants in the room

The devolved administrations feared that Westminster was using Brexit as an opportunity to repatriate functions that were rightly theirs. However, we did need a UK policy framework to maintain a level playing field. The whole question of the trade settlement, largely dealt with by fellow presenter Carmen Hubbard, was clearly crucial. One issue that arose in discussion was whether the shelf life of fresh products could be extended to offset delays at the ports.

One issue that was raised in discussion was the advanced average age of farmers (which has been high for some time). I pointed out the statistics may not reflect the reality of a farm business. For example, my brother-in-law is 75, but my nephew has just turned thirty and is driving the farm business forward. Succession planning is nevertheless perhaps an issue under researched by academics, notwithstanding all the advice available from consultants and the farming press. I suggested that The Archers had offered some good fictional treatments of the inter generational tensions that can arise in a farm business. 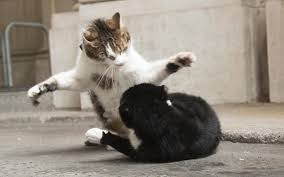 Thanks to the FCO for offering me a tour of the building, but above all the chance to meet Palmerston the Foreign Office cat who was basking in the sunshine surrounded by a semi-circle of admirers. We peeped into Downing Street, but could not see his adversary Larry.