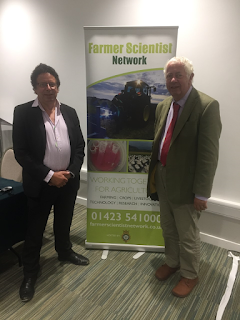 'Match fit for Brexit' was the theme of a seminar sponsored by the Farmer-Scientist Network of the Yorkshire Agricultural Society at the Great Yorkshire Show, chaired by the writer and led by James Severn and Richard King of farm business consultants Andersons. They are offering a 'Match fit for Brexit' business review to farmers for £650 plus VAT.

Andersons realistically see area payments ending and they see the following possible forms of support in the future with a budget half of the current one:

One point made in discussion was that the payments available in agri-environmental schemes might not be sufficient to motivate farmers to participate.

Andersons used their three 'model' farms to predict the impact of Brexit. (Note that their profit figures are after making allowance for 'drawings', i.e, a wage for the farming family). The arable 'Loam' farm makes a healthy £248 per hectare a year at the moment. This would go down to £108 in 2025 with good access to the EU and still over £60 with poor access. (My view is that cereal farms with no stream of income from non-farm businesses, which is the case for many of them in East Anglia, would be particularly exposed to price volatility).

The Freisian dairy farm makes a modest £4.4 per hectare at present, this would go down to £3.4 under good access and a bare margin of £0.6 per hectare under poor access.

The 'Meadow' mixed farm, which it was admitted in discussion, is not a well-run business, makes £35 a hectare at present. This would be a loss of £72 per hectare under good access and a big £233 under poor access.

The core message was that farmers should not worry about the figures they can't control like the Brexit negotiations and focus on how well prepared their own business is prepared to respond to the impact of change (albeit that the form of that change is very uncertain). There was a time window for adjustment, given a relative status quo over the next few years and a boost to prices from devaluation. Farmers need to step back from their businesses and review them. For example, farms need to look at their debt structure. Could machinery and labour be pooled with neighbouring farms?

There was some discussion about whether Brexit could lead to land abandonment, but it was felt that most available land would be farmed by someone who could do a better job with it. There was scepticism about whether there will be a big fall in land prices or rents given all the factors that are in play apart from CAP support.

The following session dealt with this topic with speakers from Newcastle University. Precision farming was defined in terms of more correct decisions per area of land or unit of time.

Drones can provide very high resolution images across a wide spectrum, more so than near earth satellites, and they can fly under clouds. However, they cannot be used in anything more than light rain or winds above 23 mph (and winds are often higher above the ground).

The sophisticated cameras cost more than the drones, the cost of which is falling. A question that arose was whether the information gathered for an average sized farm for about £100 would bring a sufficient return in terms of lower inputs and higher outputs.