What I told farmers at the GYS 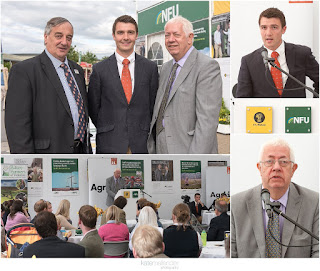 With Meurig Raymond at the Great Yorkshire Show

Here is the text of my address at the NFU breakfast meeting.

Harold Wilson used to say a week in politics was a long time. We have recently learnt than an hour in politics is a long time. Fortunately, we are now entering a period of greater stability as far as the Government is concerned. We have to wait to see who will be Defra secretary. I would expect Theresa May to approach the start of the Article 50 negotiations with some caution. Little preparatory work was undertaken by government, or at least little that was committed to paper. I think that our YAS report is actually quite helpful in terms of highlighting the issues that need to be considered.

Brussels is on holiday in August. Of course, too long a delay could lead to Article 7 being triggered. This invokes sanctions against an EU member for ‘failing to uphold the values on which the Union is based.’ However, I do not think that would be a very likely scenario.

How long the negotiations will take is a matter for speculation. They have to be completed in two years, but could be completed in less. France has a presidential election in April and May 2017, where the outcome is uncertain, and Germany has a federal election in September 2017. France is trying to carve out a leading role for itself in the negotiations and has set up its own task force led by their secretary-general for European affairs.

A few words about the negotiation process. The role of the European Council in the negotiations is to set the guidelines and key conditions while Commission staff will make concrete recommendations. The Council task force on the UK is headed by Belgian diplomat Didier Seeuws. There was some feeling in the Commission that he had been appointed too early. President Juncker’s chief of staff Martin Selymar is expected to be the Commission’s lead, at least unofficially.

The European Parliament won’t be directly involved in the negotiations, but will try to make itself felt before it carries out its official role, ratifying the final agreement. The Commission is likely to issue progress reports on the talks and the Parliament will vote on non-binding resolutions on them. One of our objectives with our report was to try and get greater attention given to agriculture and the food chain in the referendum debate. We were not very successful and I am concerned that this will happen again in the Article 50 negotiations.

The work of the YAS working party will continue and will have two main tasks:

I have been asked to be positive today and I will try to be so, but it has to be recognised that farmers face political challenges and no longer have the support of farmers elsewhere in Europe. ‘Time to cut our greedy farmers down to size’ says this article in last Saturday’s Times. It is a very ill informed article and I have criticised it in my blog. The only good point in it is when it says that the NFU is a well organised lobby. But we can expect more of this sort of thing.

Before looking at various areas of policy, I want to say something about sterling. A falling rate against the dollar and the euro brings many advantages to farmers, but also some downsides. Exports become more competitive and the value of EU subsidies rises, but the cost of inputs such as fertilisers and soya increases. Fuel prices also increase, which is why the future of red diesel is something that needs to be watched.

The future of subsidies is clearly a matter for concern as for many enterprises they make the difference between running at a profit and a loss. Pillar 2 subsidies are in many cases protected by contracts that run beyond 2020, but we were also confident in our report that there was a strong domestic coalition of support for the continuation of agri-environmental subsidies, but hopefully putting right some of the failings in the existing scheme. There needs to be some discussion about whether subsidies should move up the hill to livestock farms.

We were much less confident about Pillar 1 or basic payment subsidies. We didn’t think they would be abolished, but we did think they would be a target for the Treasury. It has to be recognised that falls in tax revenue, some of which may be longer term, will put public expenditure under greater pressure, even though the budget surplus target has been rightly abandoned.

Inertia would suggest that a modified form of the basic payment would be used, hopefully with fewer form filling complexities and payments being made to farmers on time. I am clear that there will be no return to the deficiency payments that were used in the past because it is difficult to forecast how much they will cost in any one year.

The justification for general subsidies (or support payements) needs to be articulated. In my view the strongest argument is the need to maintain a level playing field with farmers elsewhere in Europe that will continue to receive CAP subsidies. There are also food security arguments given that our ability to grow temperate foodstuffs has declined over time. One also needs to consider environmental protection and the maintenance of the appearance of the countryside.

As far as regulation is concerned, hopefully we will see the back of the monoculture regulations that interfered in farm decision-making without making any contribution to environmental objectives. I think that it should be possible to eventually get rid of the Nitrates Directive in its present form and some aspects of the Water Framework Directive.

It does need to be recognised, however, that there is a strong coalition of domestic lobbies - environmental, conservation, animal welfare, consumer, public health – that often do not have a good understanding of the challenges that face farmers.

Take the case of badgers and bovine TB which I have written about a lot, indeed I am giving a presentation at the vet school at Surrey University next week. In forty years of working on agricultural policy, I have never encountered such an intractable policy problem in which emotion often trumps the evidence.

Plant protection legislation has not worked well in the EU. The internal market is not complete. Many of the national agencies suffer from very serious problems. There is too great a willingness to accept hypotheses about risk which are not evidence based. However, the UK Government is not necessarily sympathetic, as has been shown by the recent decision to reject a revised application to use neonics this autumn. It won’t be too easy to operate a pesticides regime in the UK that is at odds with that in the EU.

Trade agreements between the EU third countries or groups of countries, of which there are over fifty, provide one of the greatest challenges, although my guess would be that probably only fifteen of these are really important for agriculture. Trade negotiations are very complex and we lack enough experienced trade diplomats, although I believe that the Government is thinking of hiring them in from private firms, which will not be cheap.

There is a major issue about migrant labour which is particularly important in terms of planting and harvesting field vegetables and fruit. I don’t have time to go into this in detail, but in my view the way forward is through a revised version of the SAWS scheme that extends to specific countries beyond the EU. As far as the border with Ireland is concerned, I think that the most likely solution is to move it back to England.

The NFU is undertaking a major consultation with its members, probably one of the biggest it has ever undertaken. I await the results of that with interest, but in the meantime the work of our working party will continue.

Sources close to the NFU suggested to me later in the day that the biggest challenge would be managing the expectations of farmers.