Is there hope in France? 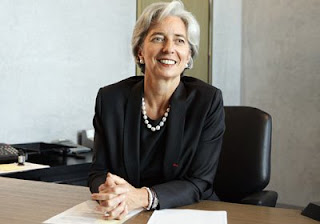 After Nicholas Sarkozy appeared to indicate that it was 'business as usual' in French agricultural policy, the appointment of Christine Lagarde as farm minister gives a ray of hope. Named as the 30th most powerful woman in the world by Forbes in 2006, she was formerly trade minister.

She was formerly chief of a big American law firm. Although she has been careful to say that agriculture would continue to have a 'strategic' role, Ms Lagarde also said that France could continue its position of 'intransigence' for ever.

Perhaps she can use her skills as a synchronised swimming champion to move the debate on CAP forward.
Posted by Wyn Grant at 2:15 AM