Water is not just an issue for Australia 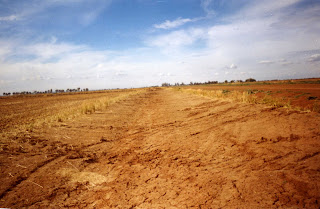 The long drought in Australia has now given way to serious floods in New South Wales. Apart from the fact that Australia is a competitor with the EU, what is the relevance for the CAP? With increasing evidence of global warming, the effective use of water is an issue that concerns everyone in the world. Adequate supplies of water for intensive agriculture are an increasing problem in many parts of Southern Europe and water abstraction for water intensive crops is an issue in many parts of southern and eastern England.

A few years ago I visited the town of Griffth, NSW. which is at the heart of an irrigation district in the Murray-Darling basin in an area known as the 'Riverina'. It is sometimes referred to as Australia's version of California's Sacramento Valley. The basin as a whole accounts for some 40 per cent of Australia's agriculture and 85 per cent of its irrigation.

My notes at the time stated, 'We visited an irrigated farm producing rice as well as wheat and canola. In the last year farms have only been permitted 38 per cent of their normal water extraction. The amount of water needed to produce rice has been reduced from around 16 mega litres a hectare to around 11, but this still leaves it as a very water intensive crop.'

Australian rice farmers lead the world in water conservation. Their water use per tonne of output is half the global average. But in the last growing season there was no water for the rice farmers around Griffith. 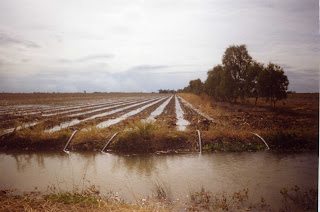 How it should look: irrigation channels at work

Droughts are nothing new in the Murray Darling because of the periodic El Nino weather pattern. However, irrigators were allowing too much water to be taken out of the Murray-Darling. By 1994 human activity was consuming 77 per cent of the river's average annual flow, even though the actual flow falls far below the average in dry years. The mouth of the river was beginning to silt up. Thanks to a combination of reduced flow and increased run-off from saline soils churned up by agriculture, the water was becoming increasingly salty.

Australia has a fragile ecology that supports a bewildering and amazing biodiversity. It is also the world's biggest exporter of 'virtual water' embedded in farm produce. Just 0.5 per cent of Australian farming is artificially watered, but it produces 23 per cent of agricultural output.

Economists argue that it would make sense for farmers to sell water from their allocations to cities, given that the average price of urban water is $A1000 per megalitre whereas farmers trade water between themselves at $A100 a megalitre in drought years. Politics also comes into it as the farmers generally support the National Party, Prime Minister Howard's junior coalition partner.

The reduction in the availability of Australian produce is one factor producing higher food bills across the world. This year's wine grape harvest has fallen by 30 per cent, the equivalent of 400 million litres. This has eased the wine glut that was hitting Australian producers, but means the end of the cut-throat discounting of the last two years.

And if a country as economically strong and politically robust as Australia has difficulties sorting out its farm water problems, what does that imply for the rest of the world?
Posted by Wyn Grant at 10:46 AM