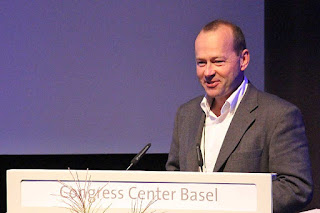 I have just returned from the 10th annual biocontrol conference in Basel under the auspices of the International Biocontrol Manufacturers Association. It also marked 20 years of the Association, so there was plenty to celebrate. Real progress has been made, but many challenges lie ahead.

I presented a paper on the progress made by the Association over the last decade. When I was involved in the RELU project on biopesticides, I made a number of criticisms of the lack of sophistication shown by the Association. This offended some people, but my stance was that of a critical friend. Indeed, someone stopped me in the hall and said that I had not been critical enough!

You can find the power points from my presentation here: IBMA Advocacy. This site also contains full information about our RELU project.

There were many excellent and informative papers, but I would like to just select a few points.

It is still taking far long to register new biocontrol products and make them available to farmers. The new legislative framework introduced by the European Union which is designed to facilitate their use as part of an Integrated Pest Management strategy is only slowly and imperfectly coming into effect.

In the past the typical company in the industry has been a small, often family owned company operating on a university science park. Some of these have grown into somewhat bigger but still small companies or have been taken over by medium-sized companies with an environmental portfolio. It can take so long to develop a product and get it registered and cash flow problems occur.

BASF and Bayer have now moved into the industry because they can see its growth potential with acquisitions of companies such as AgraQuest, known for its product Serenade. This has evidently caused some resentment in the industry and although the two companies are clearly on a charm offensive, I am not sure that it worked. It was also unclear to me if they really understood the specific character of the industry or had worked out their strategy in relation to it. I also think it may not generate the quick returns they might expect.

In an incisive presentation, consultant Roma Gwynn pointed out that the industry was still not reaching the vast majority of growers. Biocontrol is, as she pointed out, knowledge intensive. It does require more technical skill on the part of growers and this may not always be easy to find, as our research showed. I also think that the absence of a publicly funded agricultural advisory service is a real loss in countries such as the UK as it could help in the process of knowledge transfer.

Roma also made the point that we were living off research work done in the past. Not enough research was being done in universities and this could adversely affect innovation in the future.

An alternative report of the conference can be found here: Biocontrol

NFU report on UK membership of the EU

The National Farmers' Union has published an evaluation of the arguments for and against UK membership of the EU from a farming perspective. At this stage they are not taking a 'better in' or 'better out' position ahead of the outcome of David Cameron's negotiations. However, this is really a holding position so that they can maximise their influence and it is difficult to believe that they would eventually recommend withdrawal.

You can read the report here: NFU Report

Agra Europe has produced an analysis of the NFU report, emphasising that it shows the way in which the CAP has become less common: An internal market?

The 'Brexit' committee I am chairing for the Farmer-Scientist Network of the Yorkshire Agricultural Society has now produced a draft first report which will be considered at a meeting in York next Friday.

How much money are dairy farmers losing?

Dairy farmers in the UK are to receive an average one off payment of about £2,000 to ease cash flow problems. A dairy farmer in England will receive an average payment of £1,820, but the figures are higher for the devolved regions apart from Wales with farmers in Scotland being paid an average £2,620. However, NFU dairy board member Rob Harrison said that farmers were, on average, £10,000 worse off in July this year than a year ago, so the average payment would not make much difference. However, there are limits to how far taxpayers can be asked to bail out businesses in trouble, even when issues of food security are involved.

Figures of losses at dairy farms often appear dramatic and one might wonder how they continue in business at all. However, they do not take account of non-dairy income and they typically are arrived after deducting a wage for every family member involved in the enterprise.

Figures from The Dairy Group cover about 150 English and Welsh herds with an average 230 cows. Milk prices ranged widely from 19p to 32p a litre with an average price of 24.7p a litre. This range is quite odd when one recalls that one is dealing with an essentially undifferentiated product, but it is a question of who the farmer's processor is. Farmers in more geographically peripheral areas often don't have a choice.

Feed costs have fallen by about 0.8p a litre, and are likely to fall further. Many milk producers will make a loss of 3p a litre this year, but this is before one takes account of non-milk income such as that from calf and cull cow sales. Non-milk income brings in about 3.6p a litre, producing a profit of about 0.8p a litre. There is also a labour charge of £20,000 per family member.

The figures do not take into account rent, tax and capital expenditure. Nor, apparently, do they include subsidies which for many farmers make the difference between a loss and a profit.

There is no doubt that dairy farmers are having a hard time. Just as in steel, a global surplus of product is driving down prices. However, there are considerable variations from farm to farm and calculating the 'profit' figure is by no means easy. Accounts are, after all, a social construction of reality.

Is Defra for the chop?

There are rumours that the Department of Environment, Food and Rural Affairs could be disbanded in the latest round of government cuts. It has already been severely weakened in staffing terms.

Needless to say this hasn't gone down too well with farmers' representatives, even though some of them formed the view that Defra stood for Department for the Elimination of Farming and Rural Activity. They preferred the old clientist MAFF. But they fear that if Defra went, farming and food would not be properly represented at the Cabinet table.

Objectors say it is not clear who would lead on CAP reform, although the Treasury might like that role.

The importance of agricultural advisory services

Historically there was a recognition of the importance of agricultural advisory services as a means of enabling farmers to improve their productivity and adopt new techniques. However, as the state has retreated from agriculture, they have suffered in some countries. The picture across Europe is now highly variable: Project on advisory services

One lesson appears that they need political support to be successful. Innovation is of key importance to farming and, of course, it can be facilitated in a variety of different ways. However, in my view, reductions in state support for applied research have not helped in countries like the UK.

Is French food culture under threat? 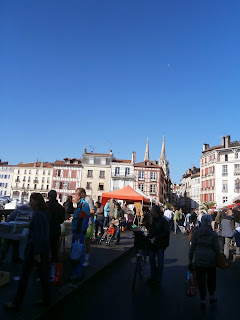 Not if a recent visit to Bayonne is anything to go by. On Friday evening I had an excellent meal at an not particularly pretentious restaurant. On Saturday morning, I wandered round the market where there was a wide variety of high quality goods on display from fish to vegetables. For a Brit, it was a bit of a shock to see a butcher selling horse meat. 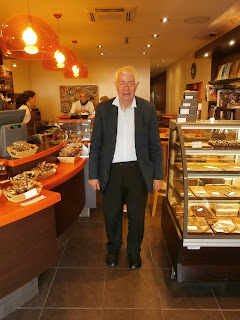 There is an historic tradition of chocolate production in the town and I enjoyed a hot chocolate at a café, opened not so many years ago by entrepreneurs.

All may then seem to be well, but my French host thought there were a number of threats. Fast food was one, along with the traditional extended lunch going out of fashion. In the past one could go to a relatively cheap restaurant and have a decent meal with authentic ingredients prepared on the premises. There was now an increased reliance on industrialised ingredients.

Farming in the Pyrénées 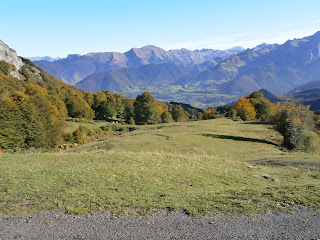 I am just back from a visit to the Pyrénées, specifically to the village of Lescun which is at a height of around 1,000 metres. Often large flocks of sheep were on the roads as 'transhumance' was taking place from the mountain areas to the valley floors. Read more about 'transhumance' here: Transhumance

The sheep here are used to produce milk from which cheese is made. This creates good value added, and along with subsidies, allows the peasants to survive. I was advised that 'paysan' is not a derogatory word in French: it is simply one of those words that does not translate well.

I also tasted yoghurt made from sheep's milk, although I preferred the product using goat milk.Reference was made to a 'progressive' local dairy farmer who had built her herd up to 20 cows. That would not be seen as viable in the UK, but it is a different style of farming. 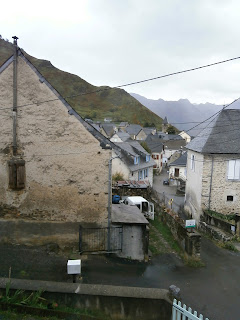 The population of the commune has shrunk as pastoralism has declined and the village has a number of second homes. Village children go to a school in the valley. Efforts have been made to ensure that there is good internet connectivity. There is a bed and breakfast (once a hotel) and some tourist activity related to the excellent opportunities for walking.