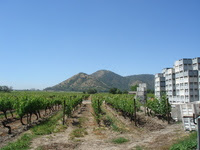 The competition: a vineyard in Chile

An impact assessment of the European Commission's proposed reforms to the CAP wine regime warns that job losses are inevitable in parts of Europe most responsible for the distillation of wine. The report quotes Italian organisations, not an entirely disinterested source, that the sector could lose 75 per centr of its jobs in Italy.

Reform is also expected to bring down the price of cheaper table wines as wine that would, under the old regime, have been distilled is instead bottled for sale (with binge drinkers in Britain being one possible market). However, specialised table wine producers in Sicily and Languedoc-Roussillion in France could see their income fall by up to a third. Enraged wine makers in Languedoc-Roussillion started fires in several French supermarkets to protest against the reform.

However, CEEV, the European wine producers' federation said that changes in the industry were inevitable in the face of growing globalisation. 'This may be the last chance we have to update the sector', warned José-Ramón Fernandez. 'We welcome the Commission's efforts as long as they are accompanied by measures to move into alternative agricultural sectors that are socially acceptable to producers.'

A Commission spokesman said that the changes were likely to mean less but better wine on the market in the short term, but in the long-term a more competitive market, together with simplified labelling and classification rules, could see production soar. 'In the long-term people around the world could be drinking French and Spanish and Italian wine, instead of New World varieties.'

Perhaps. But New World producers know that the market has changed, with a mass market less interested in provenance and more in having drinkable wines available at an affordable price. In the short run, Australian production could be hit by the country's chronic drought, a topic we hope to cover soon
Posted by Wyn Grant at 3:11 AM