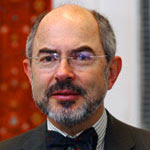 Professor Stefan Tangermann, Head of the OECD Department for Trade and Agriculture

Before he joined OECD, I would run into agricultural economist Stefan Tangermann from time to time at conferences. I was always impressed by his contributions so it is interesting to read his interview with Agra Focus, one of the latest in an excellent series. In a long interview, he had many interesting points to make and the publication itself is essential reading for those with a serious interest in agriculture and food policy. Below a few of his key themes are picked out.

This is a big item with the French presidency on the horizon. The French want to retain 'coupled' payments to areas like the Massif Central. Tangermann points out that coupling makes it harder for people to quit production if they want to. If one wants to maintain agricultural activity, a more efficient way of doing that would be to pay people to keep the land 'open' which means not allowing anything to grow above a given height. If this led to the disappearance of cows (or sheep in the UK case) tourists should be prepared to pay for them - it already happens in Austria, Tangermann points out.

Payments need to be targeted, argues Tangermann (and the OECD). Payments need to be targeted towards specific objectives that have been well defined, and according to how much the farmer contributes to attaining these specific objectives. 'So it's a three-step process that our paradigm uses - old-fashioned directly coupled policies move to decoupling, and from decoupling to targeting. And in terms of the structure of EU policies, you find targeted policies much more in the 2nd pillar than the 1st pillar.'

Biofuels add a further element of demand for agriculture products (and implicitly one that is under the control of policy-makers, unlike increasing demand in India and China). 'Moreover, it is extra demand which is very price-inelastic. In other words, demand is there irrespective of what the price is of these products.'

Tangermann states that according to OECD estimates the achievement of the EU's binding target of replacing 10 per cent of road fuel by biofuels would require something like 50 per cent of the area that is under the 'grand cultures' in the EU, i.e., cereals, oilseeds and sugar. [It should be noted that the EU estimate is much lower at 20 per cent]. 'So, all in all, the benefits of the current biofuels policy are relatively small, but the costs are obvious.'

Tangermann argues, 'It is high time that we put more resources into agricultural research and technology development. We must also make a better and more successful effort to explain to consumers and the general public what the benefit-risk ratio is in modern biotechnology and their products. People in Europe need to be aware that is a big luxury to say we don't want this modern food on our plates. And it is a luxury that will become more and more expensive.'
Posted by Wyn Grant at 12:59 AM