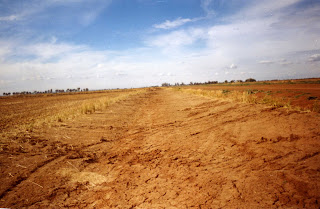 Even in an irrigation district, conditions in Australia can be dry

Australia is re-thinking its subsidy to drought hit farmers. This has a wider relevance, both in terms of how one adapts agricultural policy to climate change and how a subsidy can grow almost unnoticed. Australia has pursued a policy of eliminating agricultural subsidies, other than in investment in knowledge and R and D which most commentators would support.

The drought income supplement was an exception and it is mainly that subsidy which has pushed Australia's PSE up to a (still low) 7 per cent. What was once a 1 in 20 experience is now more likely to be 1 in 5 calling in question the notion of 'exceptional circumstances'. This is no surprise as work by Linda Botterill at ANU showed that it was difficult to come up with an objective definition of drought and the definition used is largely a socially constructed one.

In an interview with Agra Focus top Australian agricultural civil servant Stephen Hunter discussed the challenges that his country is facing in relation to climate change. He noted that Australia has always tended to have a higher variability in climate than most countries. However, the available evidence on the impact of climate change suggests that the south of the continent will become much drier with a higher variability in climate and the north will face increased rainfall. He commented, 'We have always had droughts. It's just that Climate Change is making it more likely.' On a visit to the irrigation district around Griffith, NSW a few years ago I was surprised at the amount of rice, a water intensive crop, that was being grown. But Hunter reveals in the interview that this has fallen drastically in recent years to as little as 2 to 5 per cent of normal levels. On farm, there has been a marked move away from flood iririgation and towards drip irrigation rather than sprays. One major lesson for Southern Europe in particular is the desirability of having a system of water trading in place so that it can be used at its highest value.

Hunter admits that there are limits to the extent to which the commercial market can provide multi peril crop insurance. The approach being used is to equip farmers to understand their local climate better and to outline management changes they might make to respond better to those conditions, e.g., low tillage farming to deal with soil problems.

Another interesting arrangement which allows market smoothing without distorting interventions is the Farm Management Deposit Scheme. This allows farmers to even out their income by putting into deposit surplus funds in a good year that will help them in less good years. What is distinctive about the scheme is that it is attached to tax incentives.

Australia often has some interesting policy lessons. Anyone who is interested in what I learnt on my recent visit about the management of cattle diseases can E mail me for a Power Point presentation.
Posted by Wyn Grant at 2:19 AM