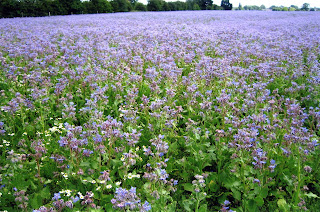 Walking the fields near my home, I noticed a new blue starflower crop that I was not familiar with. Indeed, the crop has suddenly become one of choice throughout this part of Warwickshire.

A little research established that it was Borage, a high value, speciality oil crop. Similar to Evening Primrose, Borage is recognised as a key source of gamme-linoclenic acid (GLA) and is used, when marketed as Starflower Oil, as a health food supplement or in skin care creams. GLA is known to have anti-inflammatory properties, without causing side-effevts often encountered by other inflammatory drugs.

Borage was first grown as a field crop in the UK in 1983, mainly in East Anglia. During the 1990s the crop area increased significantly. It has agronomy advantages as it is a good break crop in arable rotations. It's a low input crop with minimal environmental impact, not normally needing pesticides and requiring low inputs of nitrogen.

Under the single farm payment regime, farmers can be more ambitious about growing different crops as they do not need to sell into intervention to obtain subsidy payments. The contract price for borage is currently around £2,000 per tonne and ex farm gross margins of £630 per hectare are achievable. A number of companies in the UK offer 'buy back' contracts and agronomy support.

If grown specifically for the pharmaceutical industry, Borage can be grown on set aside land, but as the majority is grown as a food supplement this is not generally possible. However, set aside looks like it is on its way out with the increasing amount of land devoted to biofuels.

The spread of Borage into Warwickshire suggests that to an extent the policy instruments of the new look CAP are working. Of course, it also means less land devoted to conventional food crops, pushing up their price. But, in principle, it should mean that farmers get better returns from the market and have less need of subsidy.
Posted by Wyn Grant at 10:51 AM